A review of scientific literature, spanning 2006-2019, on the water-agricultural nexus in different agrosystem types across Europe is presented.
The analysis focuses on nitrogen and phosphorus emissions from agricultural systems to freshwaters at field or farm scale in the Ebro, Seine, Po, Oder, Wisla, Pinios and Axios river basins. 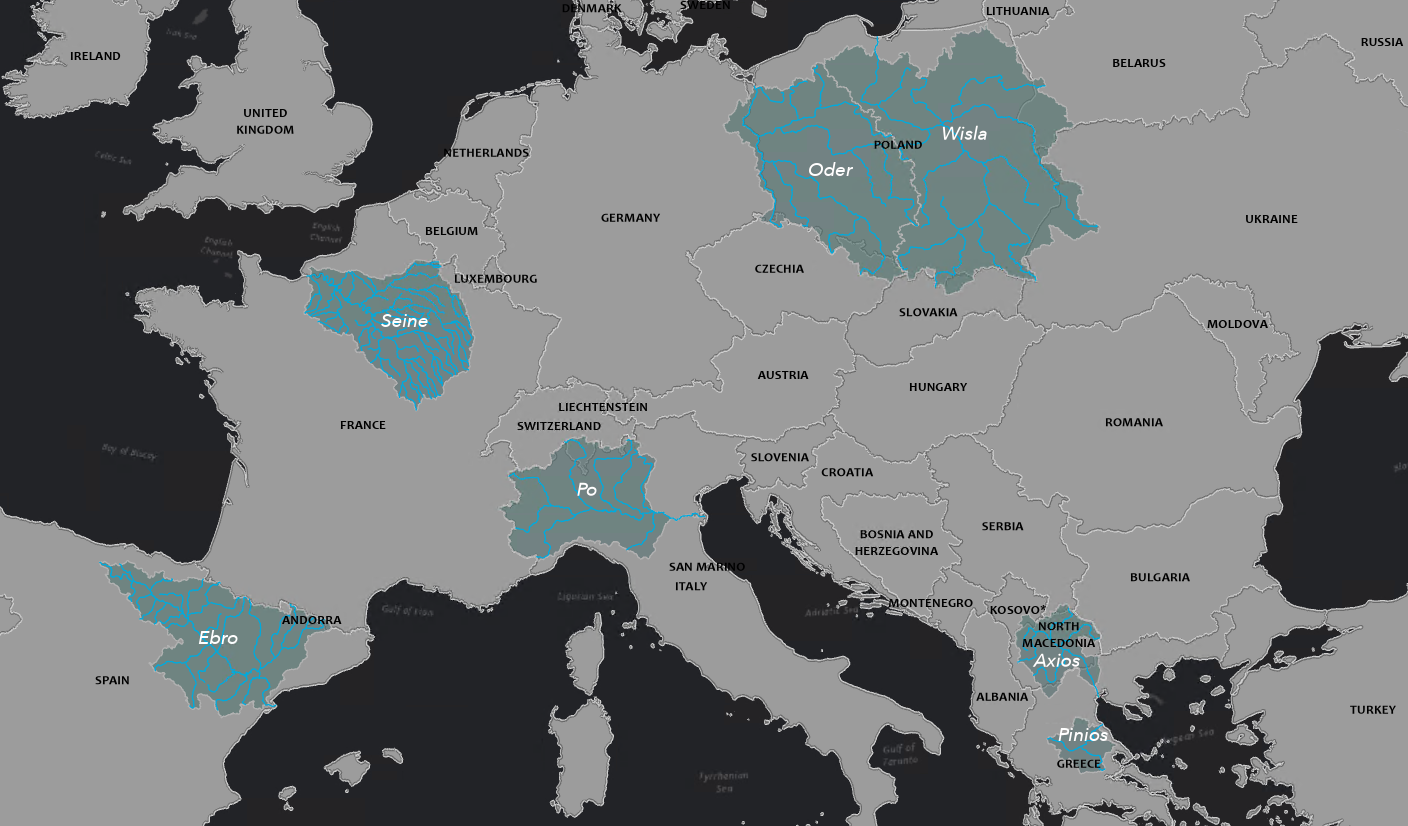 Field and farm research mostly focuses on nitrogen losses based on nutrient budgets assessed with experimental data, surveys or models. The scientific evidence cover well the most frequent cropping systems, namely cereals (especially wheat, maize and barley) and oil crops (rapeseed and sunflower). Conversely, studies on permanent crops, except maybe for wine, and horticultural crops are less frequent. Only 5% of studies considers livestock systems. While some research deal with fodder crops (alfalfa and pulses), no scientific report was found on intensive and extensive grassland, despite these systems cover about 24% of the selected basins. Thus, literature on animal farms is scarce in comparison with land extent, and generally focused on the forage production (Fumagalli et al., 2011).

Concentration and fluxes of nitrogen compounds in freshwaters associated with agriculture have increased during the last decades in the Ebro, Po and Seine basins with recent stabilization or small reversion in the Seine Basin (Causapé et al., 2006; Lassaletta et al., 2009; Romero et al., 2013; 2016; Viaroli et al. 2018). In the Seine Basin improvements of stream water quality could be delayed for years due to the long transfer through the unsaturated zone and aquifers (Ledoux et al., 2007), to the point that even with extensive adoption of optimal fertilization practices now mandatory, meeting drinking standards of 11 mgN/L would not be fully guarantee (Billen et al., 2013; Anglade et al., 2015).

In large Mediterranean catchments including rainfed and irrigated agriculture, such as Ebro and Po, three main nitrogen pollution pathways from cropland to streams and aquifers can be recognized:

Areas with high livestock density are associated with high nitrogen pollution due to overapplication of manure on croplands. In the Po basin the application of livestock manure (pig, poultry and cattle) together with synthetic fertilizers largely exceeds crop uptake, contributing to 85% of nitrogen reaching aquifers (Mantovi et al., 2006; Perego et al., 2012; Bartoli et al., 2012; Lasagna and De Luca, 2019).
Leaching from maize is very severe and 80% of surplus can be leached (Perego et al., 2012), with a higher risk in the low-yield areas (Basso et al., 2012).
Anyhow, there is high territorial diversity and in some areas such as the Volta basin in Po, good fertilization practices and the upward movement of nitrogen towards the rootzone significantly reduced nitrate leaching (Ventura et al., 2008; Morari et al., 2012).
Nitrate leaching in rice is much less severe (Zavattaro et al., 2006) except in the Po delta where salt crust formation boost nitrate leaching (Colombani et al., 2016).
In the Ebro river, a combination of intense irrigation and excessive and inefficient fertilization, particularly in maize, is the first reason for nitrogen leaching (Isidoro et al., 2006; Jego et al., 2008; Cavero et al., 2012) and phosphorus pollution to waters (Dechmi et al., 2013). The two hot spots of pollution occur during sowing in April, and summer. In particular, fertilizing before irrigation and maize sowing considerably increases the risk (Isidoro et al., 2006).
In the Axios and Pinios basins, high nutrient surpluses have been estimated in both cropping and livestock systems (Laspidou et al., 2015). In the Oder and Vistula basins, nitrogen pollution has been associated with overfertilization, particularly in soils with low humus content (Dresler et al., 2011). Greenhouse soilless culture and high livestock density farms are also important pollution sources (Bres, 2009; Kupiec, 2019).

Nitrogen leaching can be potentially reduced applying several management strategies, such as

Webmap of water-agricultural nexus in different agrosystem types across Europe

Cover crops (CC) provide multiple benefits to agroecosystems and their integrated management can generate win/win agro-environmental outcomes (Quemada et al., 2020b). CC can be useful to reduce nitrate leaching but management has to be adapted to local weather (Constantin et al., 2015). The combination of reducing nitrogen leaching, boosting nitrogen sequestration and increasing nitrogen mineralization could reduce fertilization rates by 30-55% without affecting yields (Constantin et al., 2012).
However, if CC are non-legume crops, they could immobilize nitrogen and reduce crop yields. This can be related to high C:N ratio (e.g. barley), low nitrogen content (e.g. rapeseed), or a lack of synchronization with maize uptake. Legume cover crops could avoid that problem (Salmeron et al., 2010; 2011), but may increase emissions of nitrous oxide (N2O). This increase of nitrous oxide emissions could be offset through integrated management by combining or alternating legume and cereal CC (Quemada et al., 2020b). Indeed, CC mixtures (coupling legume and non-legume) are the most efficient combination to catch nitrogen and to provide it as green manure (Tribouillois et al., 2016).

There is an important margin for improvement in both conventional and organic farming systems through better fertilization, legumes and catch-crops (Benoit et al., 2015).
Organic farming (OF) has been shown to reduce nitrogen leaching in several studies in the Seine basin, due to higher crop diversification and less fertilization. To avoid higher leaching in OF systems it is paramount to synchronize nitrogen mineralization and demand (Morari et al., 2012). Indeed, nitrogen losses (leaching and N2O) must be quantified for the whole rotation since crops have different leaching rates, from alfalfa (the lowest) to crops fertilized after fall or after legumes (Benoit et al., 2016). Nitrogen leaching per hectare is lower under OF than in conventional farming, but when scaled to crop yield the two systems may perform similarly (Benoit et al., 2014).
Some studies reported that when the whole rotation is considered, there are no differences in nitrogen yield due to high yields of some crops such as alfalfa. For this reason, in OF systems with long rotations including legumes, it would be important to valorise legume forages with local animals (Anglade et al., 2015).
Other authors (Autret et al., 2019) found similar leaching for four practices under conventional or organic farming. Factors boosting nitrate leaching in both OF and conventional systems are the use of exogenous organic matter, the lack of catch crops before spring, and the proportion of legumes in the rotation (Benoit et al., 2016). It is also important to separate the share of nitrogen surplus that is effectively leached from the share that is retained in the soil organic matter, promoting carbon and nitrogen sequestration instead of pollution (Lin et al., 2016; Autret et al., 2019).

Conservation tillage management includes no-tillage (NT) and minimum tillage (MT). Despite several agro-environmental benefits documented in literature, the impact of tillage on nitrate leaching is not always clear. Oorts et al. (2007) found no significant difference in nitrogen mineralization and leaching between NT and conventional tillage, whereas Basso et al. (2011) reported that NT reduces leaching and promotes carbon sequestration. When conservation tillage is combined with cover crops, there is a significant reduction of the available nitrogen during the drainage period but may generate higher N2O emissions (Constantin et al., 2010). NT with mulching can increase carbon sequestration but also the risk of nitrogen leaching (Coppens et al., 2006; 2007).

Several studies go beyond the farm scale, exploring territorial and structural strategies.
For example, Viaroli et al. (2018) showed that in the Po river basin nitrogen and phosphorus resources have been highly reallocated during one decade, and suggested that efficient policies should be harmonized at the basin scale.
Similar recommendations to develop strategies at basin scale have been formulated also for the Seine (Romero et al., 2016) and Ebro basins (Causapé et al., 2006).
The good use of the available organic resources is paramount to increase nitrogen use efficiency at the territorial scale, particularly in areas with high animal density where over-fertilization is common.
For example, application rates of pig slurries higher than 30-40 Mg/ha/y are not sustainable (Yague and Quilez, 2010; 2015). To stimulate circular economy and proper reuse of animal manure, a structural change oriented to reconnect crops and animals is recommended (Garnier et al., 2016).

The risk of pollution swapping

Studies warn that some practices could result in pollution swapping and, in some cases, generate conflicts between different environmental targets.
For example, some practices that promote reduction of greenhouse gas emissions may increase leaching, or at the opposite side reducing nitrogen leaching may increase greenhouse gas (N2O) emissions.
Promoting denitrification in different compartments of the system is a well-known strategy to reduce the load of reactive nitrogen into the system. In agricultural soils, the combination of anoxia, nitrate, and labile carbon stimulate denitrification; some practices, such as conservation tillage or compost application, may reduce leaching and promote carbon sequestration. If the soil quality is improved, i.e. through compost applications, crop productivity could also be increased (Castaldelli et al., 2019).
Ditches and canals and rice wetlands could boost denitrification if conservative management practices of in-stream vegetation are properly implemented (Soana et al., 2017; 2019; Litskas et al., 2010). The problem is that these solutions often trigger N2O emissions. Adopting farm-scale measures limiting N export to freshwater system would reduce the trade-off of N2O emissions associated with the in-stream N retention (Garnier et al., 2014).

Phosphorus fertilization can, in general, be reduced in Po basin (Castoldi et al., 2009), e.g. in rice fields (Zavattaro et al., 2006). In the Po basin, high phosphorus surpluses are originated in dairy and pig farms. High variability of phosphorus fluxes is associated with that of Mediterranean climate (Torrent et al., 2007).
In some parts of the Ebro basin, more bio-available phosphorus is exported as dissolved phosphorus in subsurface flows instead of surface runoff (Skhiri and Dechmi, 2012).

The key concept on best management practices is recognizing the heterogeneity of agro-environmental conditions.
Efficient practices have to be adapted to local and regional realities, to soil, climatic and crop characteristics, to the local environmental vulnerability, as well as to available resources.
Therefore, no universal measure is valid everywhere but the best one should be tailored at the local or regional scale.
Thus, it is extremely important to generate and communicate relevant local and regional knowledge through research and extension services (Giovanopoulo et al., 2011).
A wealth of research in the Ebro, Po and Seine basins has produced solid knowledge towards developing efficient agro-environmental strategies, yet research on some crop and livestock types is still missing.
Agricultural systems in the Oder, Vistula, Axios and Pinios basins have received less attention and much more research is needed.
Knowledge gaps are still existing in some important crop systems such as permanent crops or upland cereals in Mediterranean basins, managed or naturals grasslands, and livestock farms.

The content of this web page is based on the scientific review prepared by Dr. Luis Lassaletta, (CEIGRAM) Universidad Politécnica de Madrid, Spain